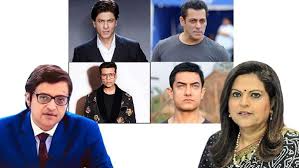 Bollywood biggies have moved the courts against Times Now and Republic that have exercised just amazing ‘’journalism using adjectives that amplify responsibility and ethics —such as “dirt”, “filth”, “scum” and “druggies” for India’s movie industry. Wah!

And borrowed from Shakespeare’s eloquence in the name of ‘fearless journalism’ with —“It is Bollywood where the dirt needs to be cleaned”; “All the perfumes of Arabia cannot take away the stench and the stink of this filth and scum of the underbelly of Bollywood”; “This is the dirtiest industry in the country”; and “Cocaine and LSD-drenched Bollywood”.

And even now insist this is “journalism”! But methinks These star anchors would have avoided a court case and earned accolades if they had just used all these words and expressions for themselves. All would fit like a T. No one would have countered that or felt the need to drag them to court. And who knows the generous people of India might have given them a standing ovation for finally speaking the truth!